REVIEW - Dune By Christian Dior Eau De Toilette for Her 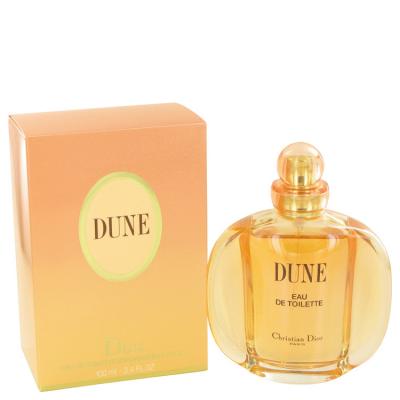 A friend of mine had just had a baby. Since she lived in another state, I decided to order a gift online and get it delivered to her as a surprise. I had already some gifts for the baby and my friend’s husband. I decided to check out some jewellery and fragrances I could gift her from one of my favourite brands, Christian Dior’s official website.

French fashion designer Christian Dior founded his eponymous brand in 1946 at the 30 Avenue Montaigne, Paris, France. The nearly 75 years old fashion house has a great diversity in its product portfolio which currently has items ranging from ready-to-wear, haute couture, watches and fragrances to accessories, jewellery, cosmetics and wines on offer. As one of the fastest rising fashion houses, Dior serves its audience in over 200 locations worldwide.

I found some jewellery which I ordered for her and filled in her address for the delivery. When I was about to close the tab, one of the perfume bottles caught my eye. The fragrance was named Dune.

The Eau de Toilette, Dune, was released in 1991. Behind this creation were the noses of the master perfumer Dominique Ropion, Jean-Louis Sieuzac and Nejla Barbir. Having tried another of Ropion’s inventions, the Armani Code by Giorgio Armani, I was pretty optimistic that this one would not disappoint me. The perfume has three different variants – 30ml, 50ml and 100ml. However, the website only had one variant to offer, which was a 3.4 fl. oz. (100ml) bottle worth $115. I ordered two bottles – one for my friend and one for myself.

I received my order within a week. I took out the perfume box from the cardboard box it was delivered in. A lot of confetti is nestled in the carton to prevent the box from being damaged. The rectangular cuboid was sunset orange in colour. At the top of the front side of the box, the brand name was printed inside a white oval with a golden edge. The perfume’s name was written right below that oval in black font. “Eau de Toilette – Natural Spray” was printed across the centre of the box in the same black font. On the bottom half of the box, a golden text read “Dior,” and below that was the capacity of the perfume printed in a small, white text. The backside of the box only contained a bar code and the company’s address.

Opening the box, I took out an oval glass bottle sitting inside. The bottle contained a sunset orange liquid inside, which almost concealed the transparent stick inside from view. The front side of the bottle had a similar text emblazoned on it as the front of the box. The only difference was that the bottom half of the bottle had the entire brand name instead of just having “Dior” printed on it. The bottle had a circular cap in the same sunset orange colour as the box, and the spray head was golden in colour.

The trio of perfumers had used a selection of seventeen ingredients to come up with the formula for Dune. The top notes include Mandarin Orange, Bergamot, Brazilian Rosewood, Peony and Aldehydes. Comprising the middles notes are Ylang-Ylang, Wallflower, Lily, Rose and Jasmine. Amber, Sandalwood, Musk, Patchouli, Benzoin, Oakmoss and Vanilla wrapped up the base notes of the perfume.

Upon the first spritz, a fresh mixture of citrus fruits and aldehydes hit the air. The floral hints of the peonies and the rich Brazilian rosewood were detectable once the citrusy notes settled in. Then, the middle notes crept in gradually. The sweet, floral combination of the flowers was tinged with a little sourness due to the presence of the ylang-ylang. The woodsy notes of the sandalwood wrapped around the amber, musk and vanilla made for classic combinations. The dark, earthy patchouli was accompanied by the bitterness of the oakmoss and the balsamic notes of the benzoin. The ingredients in the base notes prevented the fragrance from becoming too fruity or too floral. To put it in simpler words, it balanced the perfume perfectly in my opinion.

I sprayed the perfume the next day before driving to the university. The moment I entered the staff room, I had a couple of the other professors fawning over me, showering me with compliments. The perfume undeniably left an impression on everyone since I was told how pleasant and sophisticated it smelled.

When one of my classes had ended and everyone was heading out of the classroom, I had a student compliment me on their way out for not using the typical fruity-floral scents most women tend to use. I felt flattered and smug, to say the least. The base notes, as I said before, were a perfect balance for the fruity and floral elements in the top and middle notes. The base notes made the Eau de Toilette smells more balsamic, spicy and woody than fruity-floral.

What was shocking to me was the longevity of the Dune. It clung to my skin even hours after the application. I did not quite realize how long-lasting the scent was until the day had ended and I could still smell the fragrance on my skin and clothes. The silage was mind-blowing. My room still had traces of the Eau de Toilette the morning after I had spritzed it on.

Dune did not take much to get on my list of favourites. As a matter of fact, it stands at the top of the list alongside another Dior fragrance which is J’adore. I have repurchased this scent after I ran out because of how marvellous it smells. I would certainly recommend women to try it out.

It is a classic and timeless perfume that is suitable for any and every occasion.

Here are my preferred ratings for this remarkable fragrance:

Here is a short summary of my review of the Dune Eau de Toilette (1991) by Christian Dior: