Hugo Boss - Boss for Him Review 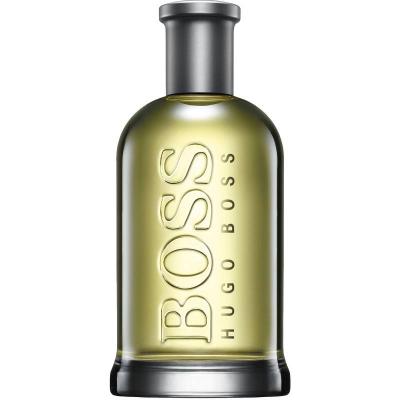 I had made a rather fruitless trip to the mall to purchase yet another bottle of my favourite perfume, Prada L’Homme, only to discover it was out of stock. Quite disheartened by that information, I decided to blind buy the next men’s perfume my eyes landed on. That perfume happened to be a Boss Bottled by Hugo Boss.

Founded back in 1924, German fashion designer Hugo Boss’ self-named brand has grown to be one of the largest German fashion houses. From high-fashion clothing, watches and footwear to fragrances, eyewear and accessories, the brand has an overflowing portfolio of diverse products targeted at both men and women. Headquartered in Metzingen, Baden-Wurttemberg, the 97 years old brand operates all across the world with its stores in over 1110 locations.

Hugo Boss launched the Boss Bottled Eau de Parfum in 1998. The Symrise master perfumer, Annick Menardo, and the Creations et Parfums master perfumer Christian Dussoulier collaborated to develop the phenomenal formula of this fragrance. The brand has three different sizes of this perfume available for purchase – a 50ml bottle for $78, a 100ml bottle for $97 and a 200ml bottle for $135.

I returned home with the 100ml bottle of the fragrance and decided to try it out, hoping beyond hope that I did not just end up wasting my money on it. The light golden coloured box was a rectangular cuboid covered in transparent polythene. The front side of the box had an indented outline of the perfume bottle, which had a black script reading, “Boss – Hugo Boss.” Below that script, a smaller font read, “Bottled,” and a white font within a black rectangle read, “Eau de Parfum.” At the very bottom of the front side, instead of a regular text, the box was indented to state the quantity of the perfume which was 100ml or 3.3 fl. oz. The backside of the box listed the ingredients used in the making of the fragrance in two different languages. It also had some other text which I did not bother reading. The bottom of the box had two stickers containing a bar code and a QR code.

Upon opening the bottle, I found the regular, bell-shaped Boss perfume bottle inside. The bottle, akin to the other fragrance bottles of the brand, was made of glass. The words “Boss – Hugo Boss” were engraved across the cylindrical body of the bottle. The bottle contained a translucent, black liquid inside it, which concealed the transparent stick inside. The silver metal cap was also cylindrical with the brand name engraved on its top. It clicked into place securely. The spray head covered beneath the stopper was also silver in colour.

Menardo and Dussoulier utilised fourteen scented elements in their magnificent formula of the Eau de Parfum. Comprising the top notes were bergamot, lemon, apple, oakmoss, plum and geranium. The middle notes included mahogany, cinnamon and carnation. Vetiver, cedar, vanilla, olive tree and sandalwood wrapped up the base notes of the fragrance.

A strong dosage of a fruity scent eagerly assaulted my sense of smell upon the first spray from the bottle. The citrusy combination of lemons and bergamots led to the initial assault. The bitter-smelling oakmoss closely followed by, which slightly tainted the sweetness of the apples and the plums. The floral traces of the geraniums were extremely faint but not lost amongst the other, powerful scents. As the top notes settled in, the middle notes were quick to take their place. The spiciness of the cinnamon and the carnations was perfectly fused. The combination then combined with the pleasant woodsy odour of the mahogany. As such, it prevented the perfume from being too sharp. The base notes, unlike the middle ones, crept in slowly. The milky, rich notes of sandalwood intensified as they mixed with the soft cedar and smoky vetiver. The woody notes swirled around the green hints of the olive tree and the enchanting, creamy scent of the vanilla to make an alluring aroma on their own.

Combined with the top and middle notes, the base notes pulled the entire perfume together to wrap up the masterpiece.

The fragrance has garnered me numerous compliments and phone numbers discreetly written in napkins or slipped into my coat pocket during a dance. Co-workers have repeatedly approached me to enquire about the perfume's name. It has to be one of the most delightful perfumes I have tried till today.

The Boss fragrance has excellent longevity. It usually lasts on my skin and outfit for around 7-8 hours. It certainly leaves a solid impression on people. It has powerful silage as well since my room typically has traces of the perfume floating around the air even the next morning after it was sprayed.

Whether you are looking for a perfume to wear on a day-to-day basis or one to wear to high-profile events, this is a brilliant choice for you. I would go as far as saying that this is one of the best blind buys for me. You can never go wrong with this fragrance. It is suitable for every occasion. Who does not love having a scent that they can spray on without being anxious about whether it is good enough for the event they are attending? Nobody!

I have repurchased this Eau de Parfum quite a few times since my first time using it because it is that incredible. I have also recommended this perfume to a lot of my friends and family members, all of whom have fallen in love with this extraordinary creation of Menardo and Dussoulier.

The master perfumers certainly have outdone themselves with this formula.

Here are my preferred ratings for this enthralling Eau de Parfum:

Here is a quick overview of my review of Boss Bottled Eau de Parfum for Men (1998) by Hugo Boss: