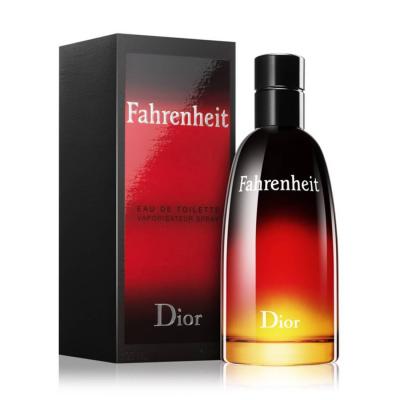 After finally having gotten my degree, I was job-hunting. From small companies to multinationals, I had searched high and low for a job and had finally found success. My job interview appointment was next Monday, and I wanted to do my best to impress the interviewers.

I already owned a few suits so that I could wear one of those to the interview. I, however, wanted something a little extra, something that would give the interviewers an excellent first impression of me. This caused me to give my brother a call and get some much-needed advice. First, he suggested that I try to find some lovely perfume to wear. His top suggestions were two he had recently discovered – Allure Homme Sport for Men by Chanel and Fahrenheit Eau de Toilette for Men by Christian Dior.

I took his advice to heart and searched up both the perfumes on their respective brand's official websites. My first search, the Chanel perfume, was unsuccessful as the fragrance was apparently out of stock for the time being. My next search, the Dior perfume, was a success. I wasted no time in ordering the 100ml bottle, having complete faith in my brother's choice. I was really excited at being able to find at least one of the two fragrances he had recommended to me. I was increasingly hopeful that the Eau de Toilette would help me give the interviewers a good impression.

My order arrived five days later. I found a medium-sized cardboard box containing the fragrance sitting on my front porch when I returned home after going out for brunch with some friends. I was ecstatic to see my parcel waiting for me and quickly grabbed it as I unlocked my front door. I waited till I had freshened up to open the package, wanting to be entirely focused on my first ever Christian Dior perfume.

French fashion designer Christian Dior's eponymous fashion brand was founded in 1946 at 30 Avenue Montaigne in Paris, France. Offering products ranging from clothing, fragrances, and watches to cosmetics, accessories, and jewellery, the brand operates in over 200 different locations around the world. Fahrenheit was a creation of perfumers Jean-Louis Sieuzac and Michel Almairac and was launched in 1988. The bottle comes in three different sizes – 50ml for $77, 100ml for $97 and 200ml for $150.

The box was a rectangular, black cuboid. It had a black and red gradient design on the front side. On the top half, a white font read the perfume's name, "Fahrenheit." The middle of the box had the words "Eau de Toilette – Vaporisateur Spray" emblazoned in the black text against the red background. The bottom half of the box had the brand's name, "Dior," written in the exact white text as the top. A smaller black script at the bottom left corner of the front side stated the bottle's capacity as 100ml.

The glass bottle inside was shaped like a bell. The bottle was ombre-coloured, amber at the top slowly fading into a lighter sunset-orange before turning into a yellow. The cap was made of simple, black plastic, shaped into a small cylindrical form. The perfume's name was written in white text across the top half, while the bottom half bore the brand's name in the same font.

Sieuzac and Almairac had used a large bowl of twenty-two ingredients in the creation of this fragrance. First, they included nutmeg flower, lavender, cedar, chamomile, mandarin orange, hawthorn, bergamot, and lemon in the top notes. Next, they put violet leaf, nutmeg, cedar, sandalwood, honeysuckle, carnation, lily-of-the-valley, and jasmine in the middle notes. Finally, they wrapped up the base notes with leather, vetiver, musk, amber, patchouli, and tonka beans.

Upon the first spritz, the citrusy scent of the mandarin oranges, the bergamots, and the lemons hit the air. This was soon followed by the sweet floral smell of the lavender, chamomile, and hawthorns, which was accompanied by the spiciness of the nutmeg flower. The soft hints of cedar lingered in the background, slightly overpowered by the citrusy notes. As the top notes settled in, the violet leaf and nutmeg wafted into the air, promptly followed by the floral hints of honeysuckle, carnation, lily-of-the-valley, and jasmines. The faint, woodsy smell from the top notes intensified when the sandalwood joined the cedar in the middle notes. Finally, the base notes made the woodsy scent come through full force as the cedar and sandalwood were bound with vetiver, musk, and leather.

The interview was a huge success. I managed to impress the interviewers who were all too keen on giving me the job after seeing all my skills and qualifications. I still like to believe that the perfume had some sort of impact on their decision. If not that, the Eau de Toilette did help in making me feel more confident during the interview. A couple of people did happen to ask me the fragrance's name when I passed them in the reception area. They seemed pretty smitten by how nice it smelled.

In all honesty, though, even I was mesmerized by the scent. I was astonished at how leathery and woodsy the fragrance was, despite having a lot of flowers used in its making. It lasts for around 7-8 hours on my skin and clothes. The silage is really great as the perfume has faint traces lingering in my room hours after it has been sprayed on. I would definitely repurchase this masterpiece and recommend this to people.

Here are my preferred ratings for this incredible Eau de Toilette:

Here is a short summary of my review of Fahrenheit Eau de Toilette for Men (1988) by Christian Dior to cut a long story short: