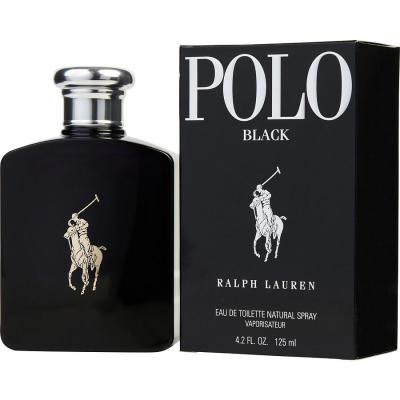 If you have a child, you are probably all too familiar with that experience where your little one grabs a random item off a shelf and refuses to let it go. You end up having to buy the object, which ended up fascinating them so that they do not scream their lungs out. That is how I ended up with a 40 ml bottle of Polo Black by Ralph Lauren. The brand’s logo ended up enthralling my two years old son because he loves horses. The next thing I knew, he had an ear to ear smile on his face as he grasped the box of the perfume between his tiny fingers while I paid the cashier with an exasperated sigh.

American fashion designer Ralph Lauren’s eponymous fashion house established back in 1967, competes in a dynamic market against other renowned brands such as Chanel, Christian Dior, Gucci, Marc Jacobs and many others. The brand has an overflowing portfolio of products ranging from luxury clothing, jewellery, fragrance and footwear to accessories, furniture and housewares. Headquartered in New York, the brand has over 1800 stores operating in various nations across the globe.

Hugo Boss, Boss for Him

Ralph Lauren released Polo Black in 2005. Firmenich perfumer Pierre Negrin was the brilliant mind behind this creation. Negrin has also previously collaborated with well-known brands like Calvin Klein and David Beckham. The Eau de Toilette is available for purchase in three sizes – 40 ml for $48, 75 ml for $68 and 125 ml for $86.

A few hours after our return home, I found my son fast asleep on the bed with the perfume package lying upside down beside him. With nothing better to do, for the time being, I decided to check the fragrance out.

Clear polythene wrapped the rectangular, black box. A bold, silver script was engraved on the top half of the front side, which read ‘Polo Black.’ Below the text was the logo of Ralph Lauren and the brand name in the same silver colour. Further below were the words, ‘Eau de Toilette’ scripted on the box along with the quantity of the bottle, which was 40 ml or 1.3 fl. oz. The back of the box had a long list of ingredients and some other information that I did not bother reading.

Ripping off the transparent polythene covering the box, I opened the top flap of the box and took the perfume bottle out. The glass bottle was rectangle-shaped with its edges rounded out. It was black and only had the brand’s logo emblazoned across the centre of the front side. The bottle’s cap was silver in colour and securely clicked into place. Underneath the silver cap was a similar silver spray head.

The first spray released a burst of fragrance into the air. The different scented elements showed off their uniqueness along with their ability to fuse seamlessly. The lemons gave a strong, citrusy aroma to the perfume. The tonka beans, on the other hand, added sweet notes to the fragrance alongside the tangerine, which carried a slight hint of honey with it. The traces of sage were very soft and hazy with a touch of peppery undertone to them. The fragrance turned sharp due to the presence of the potent bitterness of the wormwood. The patchouli balanced the bitterness of the wormwood with its sweet and earthy smell that had a woody edge to it. The mangoes were the most prominent out of all the eight ingredients due to their strong, fruity scent with peachy nuances. Wrapped around the exotic, tropical aroma of the mangoes was the lingering odour of the sandalwood. The rich woody notes of the sandalwood were soft and milky. Despite the sandalwood being rather soft in comparison to the other ingredients, it had the second most prominent scent due to its lingering scent that wrapped around the other elements and pulled them together.

The Eau de Toilette has moderate longevity. It usually tends to last for around 5-6 hours at most on my skin and attire. I do wish it lasted a little longer than it does, especially during the scorching hot days of summer when I need it to keep me smelling fresh. The silage, on the other hand, is not too impressive. It fades off within 3 hours after I spray the perfume. When I enter my room 3-4 hours later, it is almost as if I did not even put on any fragrance before heading out the door. It is quite a disappointing experience. However, given the price to quantity ratio, I would say it is a good deal.

Polo Black is ideal for day-to-day usage. It is a likeable perfume, especially since it is usable all year round. It is luckily not one of those perfumes that smell best during a specific season. You can spritz it on without taking the time of the day into account and head out the door without a second thought.

Though, it is ideal to remember that the perfume is not suitable for high-socialite functions. It is more of a fragrance you could wear when going out for dinner with your friends, a small picnic with your family or on your regular appointments with your doctor. If you are looking for something to wear on your first job interview or a meeting with foreign delegates, I suggest you steer clear of this fragrance.

Here are my preferred ratings for this fairly decent perfume:

Here is a quick summary of my review of Polo Black Eau de Toilette (2005) by Ralph Lauren to cut a long story short.