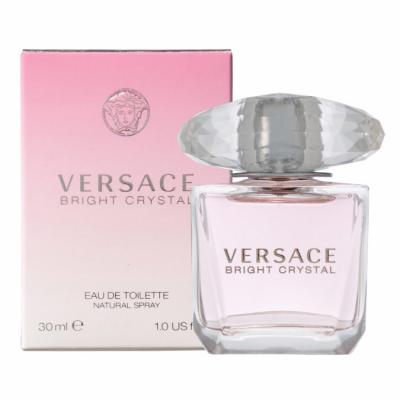 After having been away at college since the start of the new year, I returned home to spend time with my family during spring break. Upon my long-awaited return to my hometown, my mother presented me with a gift. It was a late birthday gift since she could not visit me due to her hectic work schedule. The present was a Versace fragrance named Bright Crystal.

Italian fashion designer Gianni Versace founded his eponymous fashion house in 1978 in one of the top shopping streets in Milan, Italy. Greek mythology’s infamous Gorgon, Medusa’s head is the logo of the brand. The fashion house has a diverse array of products to offer its customers, ranging from clothing and accessories to fragrances, cosmetics, home furnishings, and many more. The 43 years old fashion house, headquartered in Milan, Italy, is one of the fastest rising brands with over 1500 of its boutiques operating worldwide.

Versace launched the Bright Crystal Eau de Toilette in 2006. The brilliant formulation is a creation of the Firmenich master perfumer, Alberto Morillas, who has also worked with other large and rival brands of Versace such as Bvlgari, Calvin Klein, Giorgio Armani, Gucci, Ralph Lauren and Yves Saint Laurent. The official website of Versace offers two variants of the perfume – a 30 ml bottle for $82 and a 200 ml bottle for $140.

I took my time in opening the gift once I was all alone in my room. The perfume box – wrapped in transparent polythene - was square and coloured with an ombre effect. The top half was light pink, which gradually faded away into white in the bottom half. The top of the front side of the box bore the Medusa logo of Versace. Across the centre of the front side, a black script read, “Versace – Bright Crystal.” At the bottom of the front side, the left and right corners stated the quantity of the perfume in two different units – 200ml and 6.7 US fl. oz., respectively. The centre of the bottom half had the words “Eau de Toilette – Natural Spray” printed in a smaller, black font.

Ripping off the clear polythene, I opened the box to take the perfume bottle out. The bottle nestled inside the box was purely made of clear glass. It was square with the bottom edges rounded. The pink liquid inside the bottle was a few shades lighter than the colour on the perfume box. Moreover, the transparent stick inside the bottle was barely visible. Meanwhile, the front side of the bottle had the words “Versace – Bright Crystal” engraved across the centre. The cap was transparent as well and beautifully crafted to give off a crystal effect. The silver spray head was a typical, circular one.

The master perfumer utilised nine elements to develop this fragrance. The top notes include Pomegranate, Water Notes and Yuzu. The middle notes consist of Lotus, Peony and Magnolia. Mahogany, Amber and Musk wrap up the base notes of the Eau de Toilette.

The first spritz brought out the citrusy, sweet and bitter notes of the yuzu into the air. Quickly following it were the sweet and sour hints of the pomegranate, with the water notes giving off a slight coolness to the perfume. As the top notes settled in, the middle notes made their appearance into the mixture. The light and airy notes of the lotus came in first, followed closely by the fresh scent of the peony and the slightly lemony-tinged magnolia. Just as the middle notes combined with the top ones and settled in the air, the base notes crept into the fusion. The sweet and powdery amber wrapped the musk, which had the undertones of the woodsy notes of the mahogany floating around. And it pulled the fragrance together.

Morillas combined the ingredients to give an excellent balance between the sweet and sour notes. The Eau de Toilette has a light fragrance with a powdery finish. The citrusy notes were not overpowering, which is great for me as I do not want to smell like just another cheap, citrus-scented or fruity-floral shower gel.

The perfume got me a handful of compliments when I went to brunch with a group of my high school friends. They loved how it was not a regular, citrusy fragrance that becomes overpowering to the point of being nauseating. One of my friends called it an ideal choice for women who love fruity-floral perfumes but have a low tolerance for strongly scented fragrances. The airy floral notes were more prominent than the fruity top notes. The base notes were perfect balancing agents to make sure none of the notes was being overshadowed by the others.

The Eau de Toilette has moderately great longevity as it usually lasts on my skin for a reasonable amount of time given that I do not do much physical activity to make myself sweat profusely. If I do happen to sweat, the perfume wears off in about a couple of hours at most. The silage is not very impressive since the aroma fades a couple of hours after usage despite having sprayed on a hefty amount.

Altogether, the perfume is pretty nice. In my opinion, it is more of a daytime fragrance and smells better during summer and spring than during other seasons. Even though it is not suitable for every occasion, it can be worn out for casual causes such as days out with friends, while running a couple of errands or going shopping for example.

The perfume does have a reasonable price to quantity ratio. You can purchase it if you are looking for a fragrance to wear out for casual occasions, such as when going out to shop for groceries or when collecting your mail. I do, however, suggest you steer clear away from it if you are looking to make a great first impression. There are many more sensational fragrances out there in the market. This is not suitable for job interviews or high-professional business meetings.

Here are my preferred ratings for this decent Eau de Toilette:

Here is a summary of my review of Bright Crystal Eau de Toilette (2006) by Versace to cut a long story short: