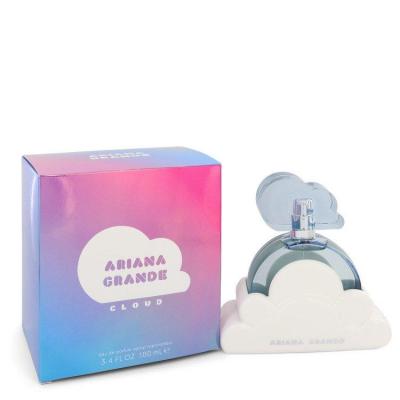 I had attended a concert by the American singer Ariana Grande's Sweetener world tour. I heard two girls talk about how amazing the Cloud Eau de Parfum by Ariana Grande smelt during that concert. I did not pay much heed to that conversation until I was standing at an Ulta store a couple of days later and looking right at a bottle of the perfume mentioned above. On a whim, I purchased a 100ml bottle before leaving the store.

Ariana Grande released the Cloud Eau de Parfum in 2018. Firmenich perfumer Clement Gavarry created the fragrance. Gavarry has also previously collaborated with well-known brands such as Abercrombie & Fitch, Calvin Klein, Giorgio Armani, Prada and Tom Ford. There are three Eau de Parfum variants available for purchase – a 30 ml bottle for $45, a 50 ml bottle for $55 and a 100 ml bottle for $65.

When I returned home, I checked out my newest perfume. The box was square-shaped. It had a gradient effect with three different metallic colours, which were blue, pink and purple. The front side of the box had a white cloud printed across its centre. As I closely examined the box, I saw the words "Ariana Grande" were spelt on the cloud with the combination of the three colours of the box. Right below the cloud, a white font spelt out the name of the perfume. My further inspection showed that a smaller white text read out, "Eau de Parfum Spray/ Vaporisateur," on the bottom of the front side. Below that, the perfume's quantity showed 3.4 fl. oz. or 100ml. While the backside of the box had a picture of the American singer, the top flap of the box had her name written in a white script.

The bottle inside was sky blue. The glass bottle was circular except for the bottom part. The bottom part of the bottle was flat so that it could stand on its own. A transparent stick was visible inside the perfume through the clear, blue glass body. The bottle came in a white plastic stand that was cloud-shaped. The cloud had a shiny, grey text across the bottom of the front side reading out "Ariana Grande." There was a noticeable, similar grey text across the centre of the bottle. The cloud stand was not functional since the bottle fell out of the platform with ease if the bottle is titled. The bottle's cap was made out of transparent, blue plastic in the same shade as the bottle. It was similar to a small cloud.

The spray head was silver in colour and cylindrical in shape.

Gavarry had only used nine ingredients to formulate this fragrance. Included in the top notes are Bergamot, Lavender and Pear. The middle notes comprise Coconut, Praline, Vanilla Orchid and Whipped Cream. Finally, the base notes included woody notes and musk.

Upon the first spray, the most potent note I could detect was the whipped cream. I was surprised since I did not expect to smell the whipped cream right off the bat. I was able to identify the citrusy hints of the bergamots and the sweet traces of the pears soon after I got used to the heavy odour of the whipped cream. I was only able to get a tiny whiff of the lavenders. If not for that whiff, I would not have believed that lavenders were ingredients of this fragrance. As the top notes slowly settled in, the hefty dose of whipped cream still lingered in the air. Soon, the sweet, balsamic scent of the praline and the milky notes of the coconut set in. Floral hints of the vanilla orchid swirled around the mixture, slightly overshadowed by the praline and whipped cream. Finally, the base notes came into play. The combination of musk and woody notes never fail to appease me with their delightful aroma. Altogether, the perfume smelled very sweet with a slight hint of fruity-floral notes.

The fragrance, as wonderful as it smelled, made my head snap up at the very first sniff. There was only one thought running through my mind the entire time. It is Baccarat Rouge 540! As I continued thinking about how similar the two Eau de Parfum smelled, I reprimanded myself for being silly. There was no way this Ariana Grande perfume that cost me $65 was a dupe for quite an expensive Francis Kurkdjian fragrance.

To put my mind at ease, I grabbed my 70ml bottle of the Baccarat Rouge 540 Eau de Parfum and sprayed it into the air. The experiment only solidified my suspicions. Cloud smelled the same to me as the Baccarat Rouge 540. I was perplexed, to say the least, since the two scents did not have a single ingredient in common.

Regardless of the similarities, I tried out the Cloud fragrance to see how it performed. The scent is a tad bit too airy to the point where it seems to disappear from your skin a few minutes after you spray it on. It does come back a little while later though it smells faded and very light. I would say it has moderate longevity since I have had to respray the perfume a couple of times throughout the day. The silage, however, is meagre. The scent lasts in my room for about 2-3 hours before it completely disappears.

Cloud is a suitable perfume for daily usage. If you are looking for something to wear when you go out for a morning walk, run errands or grocery shopping, you can use this. It is also a great dupe for the Baccarat Rouge 540, so it is suitable for high-profile occasions. However, make sure that you have the bottle handy. It will allow you to respray it since it does wear off rather quickly.

Here are my preferred ratings for this alluring perfume:

Here is a quick overview of my review of Cloud Eau de Parfum (2018) by Ariana Grande to cut a long story short: